Broadly speaking, attachment refers to the tendency, particularly but not exclusively, of infants and young children to rely on a parent figure for comfort and support when frightened, stressed or ill. It is thought to be a form of biobehavioural adaptation, shaped by the forces of natural selection to maximize survival and eventual reproduction, and the key features of attachment are similar across many mammalian species, particularly the higher primates. The field of attachment owes much to John Bowlby, who articulated an evolutionary account of attachment, and Mary Ainsworth, who pioneered its study in naturalistic contexts.

Attachment behaviours generally are divided into three classes: (i) signalling or distal communication (e.g. calling, crying); (ii) proximity seeking (e.g. crawling, walking, reaching) and (iii) contact maintenance (e.g. clinging). Monitoring the whereabouts and availability of an attachment figure may also be described as attachment behaviour. Attachment is characterized by heterotypic continuity, meaning that while it evidences continuity over time in its basic functional organization, the specific child behaviours used to achieve comfort or security change radically in complexity and sophistication as children mature.

Thus, attachment behaviour performs a kind of homeostatic function, and to operate efficiently it needs to be guided by information about the environment, for example the nature and location of the threat, the caregiver’s whereabouts, and contextual information as to the potential efficiency of various forms of action, etc. Developing this idea, Bowlby proposed that during repeated experiences within an attachment relationship, children develop internal working models of attachment that guide their thinking, feeling and behaviour in attachment situations, and this shapes the way they approach close relationships – and see themselves within them – in the future. 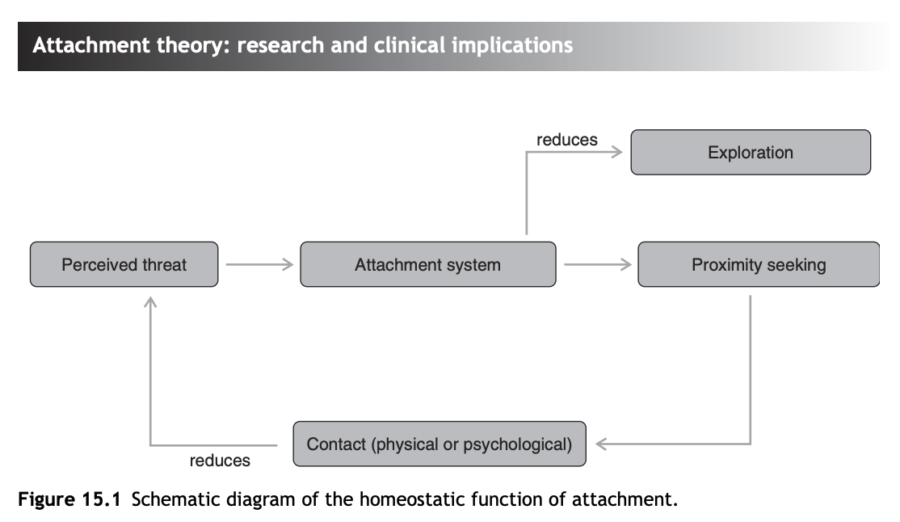 ATTACHMENT VARIATIONS AND THEIR MEASUREMENT

Mary Ainsworth’s Strange Situation Procedure is the most commonly used tool for studying attachment behaviour. Involving an encounter with a stranger and 2–3-minute separations from a parent in an unfamiliar setting, it is used with infants aged approximately 11–18 months. The reliable and valid Ainsworth coding system quantifies four dimensions of attachment behaviour, each rated on a seven-point scale. It also enables raters to make categorical judgements about the style or classification of attachment behaviour displayed by individual children (Table 15.1).

These divide into two broad classifications – ‘secure’ (Type B) and three types of ‘insecure’ attachment: Type A (Avoidant), Type C (Resistant) and Type D (Disorganized). These classifications have become a major focus of research, with findings indicating that the majority of infants in low-risk circumstances (approximately 65%) are described as ‘secure’; approximately 15% as Avoidant; 10% as Resistant and 15% as Disorganized. It is this latter category that has attracted the most attention clinically, as it appears most closely related to more severe forms of adverse parental care, and to raised risk of psychopathology. The prevalence of the different insecure subtypes varies considerably across cultures. A host of similar measures have been developed for assessing attachment in older children.

CAUSES OF VARIATION IN ATTACHMENT

Ainsworth originally proposed that the extent to which the parent was sensitive and responsive to the child’s attachment signals was the critical determinant of attachment security. Since then, this hypothesis has been supported by an impressive database of longitudinal studies. Furthermore, randomized controlled trials of clinical interventions designed to improve sensitive parenting have been shown to increase the likelihood of secure attachment, suggesting the association is a causal one [10]. However, many authors have noted that the effect sizes in correlational studies or clinical trials are not large and that other factors – either different aspects of parenting or different types of causal influence altogether – probably play a role. While sensitive care may be thought of as the most important proximal determinant of attachment security, a host of more distal or contextual factors also appear to be consistently associated with security and insecurity, including parental depression, social support, marital quality and poverty. Importantly, evidence indicates that genetic factors play a quite limited role in the development of attachment in infants and preschoolers.

Disorganized attachment has a quite different set of determinants than the other insecure categories. Critically, maltreatment has been consistently linked with Disorganized attachment. Furthermore, in populations where rates of maltreatment are likely to be low, observed sensitivity (or insensitivity) appears not to be a critical factor. Instead, a quite different set of parenting features has been implicated, representing behaviour that has been described as frightened/frightening or extremely insensitive (Table 15.2). Aside from the great clinical significance of these findings, they also provide support for an intriguing theory about the causes of disorganized attachment behaviour originally proposed by Main and Hesse. They argued that the incoherent behaviour seen in disorganization occurs when the parent is the source of both comfort and threat. This is thought to create an irreconcilable approach–avoidance conflict, which causes disruptions in attachment behaviour (see Table 15.1), as two incompatible tendencies compete for control of behaviour. The data on frightening parenting and maltreatment bear this idea out well, although the precise mechanisms just described have never been directly verified. 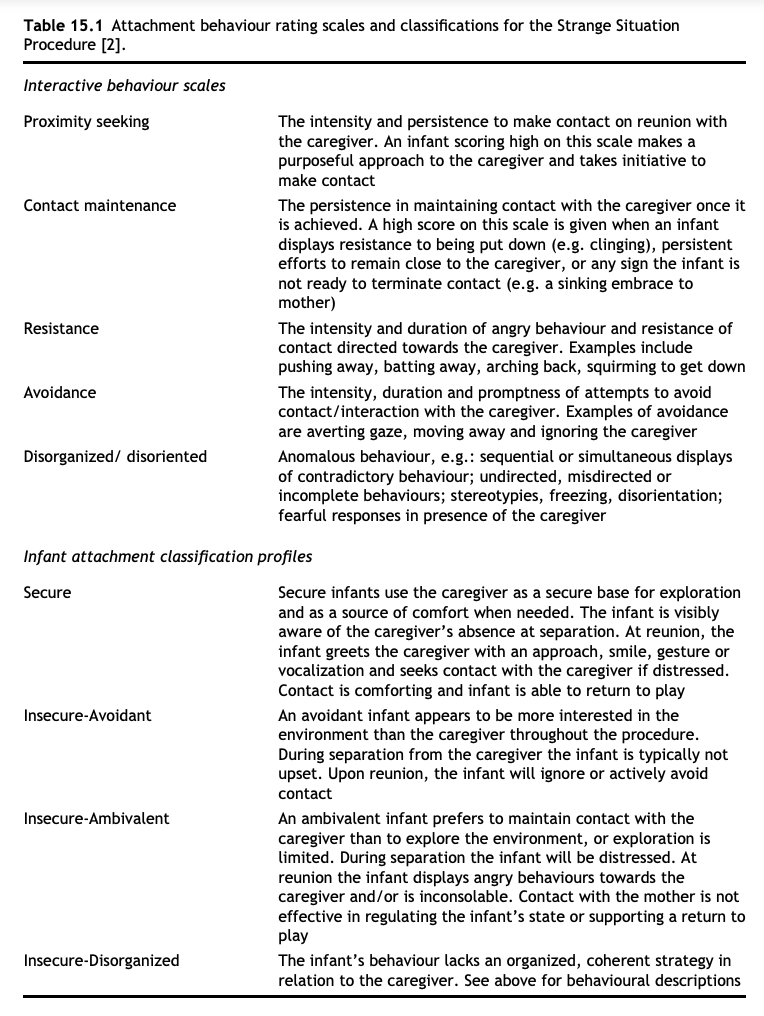 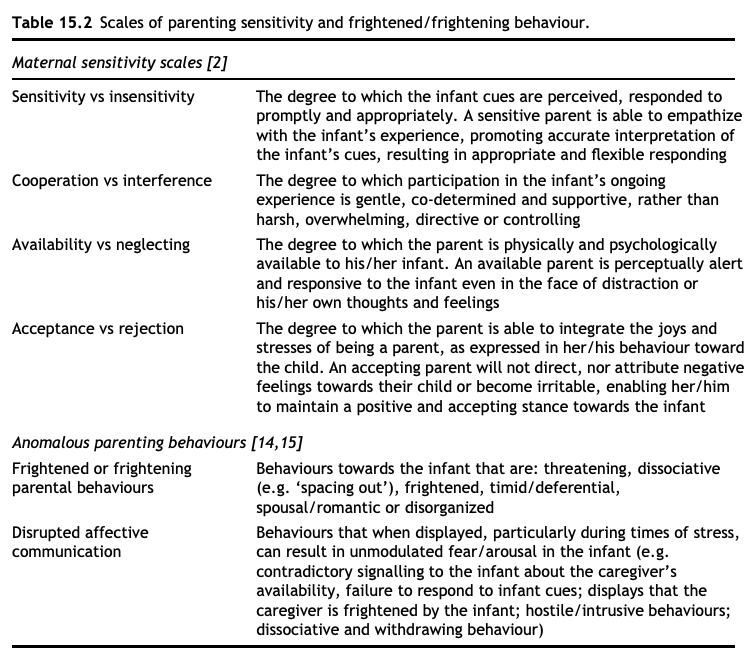 Disorders of attachment have been found when children have experienced either the complete absence of a consistent carer, severe maltreatment or major disruption in the continuity of care – as in children raised in institutional or foster care. A significant number of children raised in such circumstances show quite pervasive patterns of disturbed social relatedness, collectively referred to as reactive attachment disorders (RAD). The current diagnostic systems – the Diagnostic and Statistical Manual of Mental Disorders IV, Fourth Edition – Text Revision (DSM-IV-TR) and the ICD-10 International Classification of Mental and Behavioural Disorders in Children and Adolescents (ICD-10) – define two types of RAD. The first, known as the inhibited/withdrawn type, is marked by extreme withdrawal, a lack of a clearly preferred attachment figure, a pervasive tendency not to seek comfort from others when distressed, and a lack of social responsiveness or reciprocity. The second, known as the disinhibited type, by contrast is marked by indiscriminate attachment behaviour and friendliness and a lack of wariness of strangers (e.g. wandering off with strangers). There are a number of tools for assessing attachment disorders and related behaviours, including standardized questionnaires, interviews and observation schemes .

CONSEQUENCES OF VARIATIONS IN ATTACHMENT

Early attachment relationships are thought to exert a significant and important influence on current and later relationships, well-being and psychological health. Longitudinal research suggests that securely attached children may have developmental advantages over their insecure counterparts in areas such as emotional regulation and understanding, social cognition, social competence and emotional/behavioural problems. While not all findings have been consistently replicated, recent meta-analyses have found robust associations with peer relationships and externalizing problems. With respect to the latter, the evidence indicates that Disorganized children are the most at-risk amongst the insecure subtypes.

The jury is still out on whether the effects of early attachment on later development represent the direct influence of early experience, or whether continuities over time in other intermediary processes (within the individual and in their environment) are responsible. Considerable evidence suggests that some of the effects of insecurity fall into this latter category. For example, continuity in the quality of care is associated with longitudinal links between attachment and outcome. On the other hand, some findings do suggest that early experience can have specific and lasting effects, particularly severe early deprivation and its effect on disinhibited attachment disorder and accompanying symptoms.

Two broad types of attachment interventions are apparent in the literature. The most widely used are those in the realm of prevention. Here, the aim is to improve rates of secure attachment with a view to promoting resilience and reducing the risk for later emotional or behavioural problems. The second type of intervention focuses on children where attachment problems are primary, or of great clinical relevance – for instance, children who have experienced maltreatment and may be in foster care, or late-placed national or international adoptees.

An example of a highly successful preventive intervention is that conducted by van den Boom, in which 100 highly irritable neonates were allocated at random to a treatment or control group. Home visits to mothers and infants in the treatment group focused on maternal interaction skills, encouraging mothers to respond appropriately to their infant’s cues, encouraging soothing in response to infant distress, and increasing playful interactions. Large positive effects on maternal sensitivity, and on infant attachment security, were found and these were maintained at a 3.5-year follow-up. A meta analysis of interventions aiming to increase maternal sensitivity and promote secure attachment in low-risk community samples or at-risk clinical samples (e.g. maternal postnatal depression) has been undertaken .

The authors found that the most effective interventions were those that were:

Critically, intervention effects on attachment were strongest when the intervention successfully improved sensitivity, and when the treated population had a large percentage of insecure infants, suggesting, perhaps not surprisingly, that appropriate targeting is important in achieving successful outcomes. Sensitivity-based interventions have also been shown to be effective in reducing rates of Disorganization. While the majority of interventions concern infants and toddlers, some very promising treatments are available for preschoolers and older children.

Interventions with fostered and adopted children

A number of effective treatment packages have been devised that are specially tailored for foster care and adoption. For instance, the Attachment and Biobehavioural Catch-Up programme is a 10-session multicomponent intervention addressing mutual processes between parent and child that may interfere, directly or indirectly, with the child’s self-regulatory capacities and attachment. These include: parental interaction skills; parental attributions; and how the parental childhood history may contribute to current parenting attitudes and behaviour. This approach has been found to improve attachment behaviour and normalize stress patterns as indicated by the hormone cortisol.

The study of attachment has highlighted the potential importance of understanding the early relational roots of both adjustment and maladjustment. The field has also focused attention on how one observes and measures attachment and the sometimes subtle interactional processes that take place within parent–child relationships. Critically, this has led to the development of a range of quite effective treatment techniques designed to enhance the security of attachment relationships in early life. The long-term effectiveness of such treatments for reducing risk for psychopathology and promoting resilience remains to be fully established, and is an important area for future clinical research.