In this section and in the exercises at the end of the lesson, you will see how to couple an agent to an environment. In all cases, however, the nature of the connection between them is the same: actions are done by the agent on tie environment, which in turn provides percepts to the agent. First, we will describe the different types of environments and how they affect the design of agents. Then we will describe environment programs that can be used as testbeds for agent programs.

Environments come in several flavors. The principal distinctions to be made are as follows:

In an episodic environment, the agent’s experience is divided into “episodes.” Each episode consists of the agent perceiving and then acting. The quality of its action depends just on the episode itself, because subsequent episodes do not depend on what actions occur in previous episodes. Episodic environments are much simpler because the agent does not need to think ahead.

If there are a limited number of distinct, clearly defined percepts and actions we say that the environment is discrete. Chess is discrete—there are a fixed number of possible moves on each turn. Taxi driving is continuous—the speed and location of the taxi and the other vehicles sweep through a range of continuous values.

We will see that different environment types require somewhat different agent programs to deal with them effectively. It will turn out, as you might expect, that the hardest case is inaccessible, nonepisodic, dynamic, and continuous. It also turns out that most real situations are so complex that whether they are really deterministic is a moot point; for practical purposes, they must be treated as nondeterministic.

Figure 2.13 lists the properties of a number of familiar environments. Note that the answers can change depending on how you conceptualize the environments and agents. For example, poker is deterministic if the agent can keep track of the order of cards in the deck, but it is nondeterministic if it cannot. Also, many environments are episodic at higher levels than the agent’s individual actions. For example, a chess tournament consists of a sequence of games; each game is an episode, because (by and large) the contribution of the moves in one game to the agent’s overall performance is not affected by the moves in its next game. On the other hand, moves within a single game certainly interact, so the agent needs to look ahead several moves.

The generic environment program in Figure 2.14 illustrates the basic relationship between agents and environments. The simulator takes one or more agents as input and arranges to repeatedly give each agent the right percepts and receive back an action. The simulator then updates the environment based on the actions, and possibly other dynamic processes in the environment that are not considered to be agents (rain, for example). The environment is therefore defined by the initial state and the update function. Of course, an agent that works in a simulator ought also to work in a real environment that provides the same kinds of percepts and accepts the same kinds of actions.

The RUN-ENVIRONMENT procedure correctly exercises the agents in an environment. For some kinds of agents, such as those that engage in natural language dialogue, it may be sufficient simply to observe their behavior. To get more detailed information about agent performance, we insert some performance measurement code. The function RUN-EVAL-ENVIRONMENT, shown in Figure 2.15, does this; it applies a performance measure to each agent and returns a list of the resulting scores. The scores variable keeps track of each agent’s score. 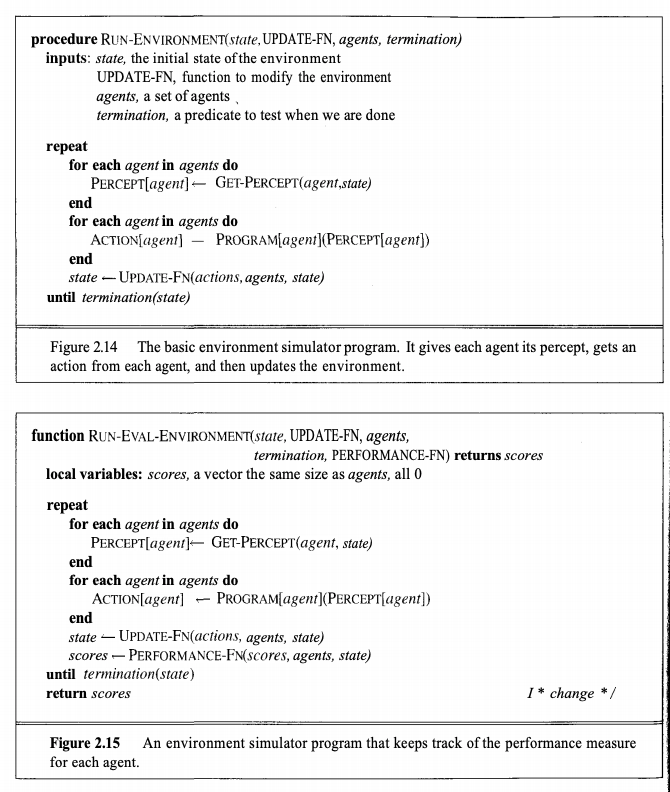 RUN-EVAL-ENVIRONMENT returns the performance measure for a single environment, defined by a single initial state and a particular update function. Usually, an agent is designed to work in an environment class, a whole set of different environments. For example, we design a chess program to play against any of a wide collection of human and machine opponents. If we designed it for a single opponent, we might be able to take advantage of specific weaknesses in that opponent, but that would not give us a good program for general play. Strictly speaking, in order to measure the performance of an agent, we need to have an environment generator that selects particular environments (with certain likelihoods) in which to run the agent. We are then interested in the agent’s average performance over the environment class.