Several researchers have carried out research studies to identify the factors that motivate people to start business enterprises. The findings of some of the studies are as follows.

1. In this pioneering study, R.A. Sharma classified all the factors motivating the entrepreneurs into two types as follows :

(c) Desire to do something pioneering and innovative

(d) Desire to be free and independent

(a) Assistance from Government

(b) Financial assistance from institutions

Among the internal factors, the desire to do something creative was important. It means the desire to make a contribution to the development of the state, to introduce an entirely new product in the market, to place the home town on the country’s industrial map, to make full use of technical skills, to provide employment to intelligent young men and women in the community, etc. Occupational experience (familiar with the product, knowledge of the market, etc.) was rated as the second most important internal motive. Business experience provides confidence for starting anew enterprise. Technicians, engineers and executives rated business experience more important motivator than other types of entrepreneurs.

Among the external factors, assistance from financial and other Governmental institutions was rated the strongest motivator. Other factors include availability of surplus funds, sick units available at a cheap price, success stores of first-generation entrepreneurs, support of mends and relatives, etc. In some cases there were compelling reasons like loss of job, death of the father dissatisfaction with the job held, etc., prompting people to launch their own industries.

2. H. N. Pathak indicated that at small scale level, profit motive inspired small scale entrepreneurs. Ambition for independent working in industry also motivated non-corporate level entrepreneurs. Sharma’s study also revealed that motivating factors varied according to the, occupation background of entrepreneurs. Business executives, engineers, consultants, traders, considered occupational experience as most important. According to McClelland, executive generally have higher need for a achievement than men in other occupations. On the other hand, government servicemen, contractors and entrepreneurs from agricultural activities considered assistance from government and financial institutions as the most important factor.

3. After making different studies on technical and new entrepreneurship, Arnold C. Copper concluded that there are three main groups of factors which influence an entrepreneur. These are

(i) the characteristics of the entrepreneur including many aspects of his background (family, education, age; occupational experience, etc.) which make him more or less, inclined towards entrepreneurship. These might be called “internal factors”

(iii) a complex of’ external influences’ including the availability of venture capital, collective attitudes and perceptions leading to entrepreneurship, and the accessibility to suppliers, personnel and markets.

1. Entrepreneurial ambitions (a) To make money (b) To continue family business (c) To secure self-employment/independent living (d) To fulfil desire of self/wife/parents (e) To gain social prestige (f) Other ambitions-making of a decent living, self-employment of children, desire to do something creative, provide employment to others.

2. Compelling reasons (a) Unemployment (b) Dissatisfaction with the job so far held or occupation pursued (c) Make use of idle funds (d) Make use of technical/professional skills. (e) Others-maintenance of large families, revival of sick unit started by father, etc.

The study was conducted on 334 entrepreneurs in two coastal towns of Anakapalli and Gudivada of Andhra Pradesh. The ambitions of continuing family business and securing self-employment emerged as the most significant motivating factors. Making money and gaining social prestige were found to be insignificant.

May a time, it is the compulsion rather than the ambition that leads the man to success. Sometimes the initial ambition and the opportunities may clash with each other. In such cases, compulsion of the situation determines the destiny. Therefore, it is, appropriate to examine the reasons that might have compelled the entrepreneurs to, pursue entrepreneurship. Making use of technical and professional skills was found to be the most important compulsion that has driven most of the respondents to entrepreneurship. Dissatisfaction in the job or occupation pursued was the second important compulsion and other compelling factors were insignificant. It may be inferred that the entrepreneurs wanted to capitalise their skills for themselves than working for others. They felt that their abilities were certainly more than what the job required and their aspirations exceeded what normally the job provided.

Ambitions or compulsions alone may not make a man an entrepreneur. The moral support and encouragement of family members, friends and relatives, previous experience and inherited property are very helpful in the growth of entrepreneurship. Moral support from the ‘near and dear inspires the would-be entrepreneur, reinforces his confidence and prepare him to face the new challenges boldly.

Among the facilitating factors, previous association in the same or other lines of activity was rated highest followed by previous employment in the same or other lines of activity. Previous association and employment gave abundant self-confidence. Previous employment here meant a person being employed for making a living. On the other hand, previous association implied apprenticeship in business firms. Most of the entrepreneurs expressed the view that it was better to get the training as apprentices or employees before setting up an enterprise. Such experience instils confidence among the youth, serves as the nursery for buildings the enterprise and accelerates the process of generation of entrepreneurship.

The success stories of entrepreneurs were recognised as an important factor that inspired new entrepreneurs. This finding points out the need for the introduction of entrepreneurial stories in school curriculum along with the stories of political leaders and social reformers. This is in conformity with Eugene Staley’s pilot study in Osmanabad (Maharashtra). Unfortunately, in India successful business leaders are denigrated by politicians. This generates a sense of hatred in the minds of youth towards leaders of industries, An impression is created that entrepreneurship itself is something unethical or antisocial. Such an impression thwarts the healthy growth of, entrepreneurship in the country.

The study by Murthy et. al also revealed that the family property and assistance from relatives and friends was the most significant source of initial capital for an entrepreneur. Such risk capital from family funds enhanced the entrepreneur’s trustworthiness in the money market and relieved him from the fear of business failure. It indicated the family’s confidence in the entrepreneur and the family’s willingness to risk saving in entrepreneurial activities. Thus, in Indian society entrepreneurship cannot be considered as an individual phenomenon and strictly intrinsic to the person involved. Rather it is an extension of the family aspirations and ambitions that are ultimately realised by an individual.

Caste wise perception of the occupation in terms of social image were also anlaysed. Entrepreneurs’ perception with different caste origins different markedly. The analysis indicated that farmers might like to change to nonfarming and traders to manufacturing because they carry higher image in the public mind.

5. Two subsequent studies in Andhra Pradesh have by and large corroborated the findings of Murthy, et. al In his study of 87 manufacturing units in thirteen industrial estates of Andhra Pradesh, N. Gangadhar Rao found that making money is the most important ambition and fulfilment of the desire of self/ wife/father as the second important ambition. However, the aggregate pull of non-money ambitions was found to be more than twice of the money ambitions. Family members play useful role in giving shape to entrepreneurial ambitions. In view of the significance of earning motive, achievement motivation programmes should be designed to inculcate ambition for money. Among the compelling reasons, dissatisfaction with the job held so far or the occupation so far pursued was rated the highest followed by making use of idle funds.

Inherited property, technical and professional qualifications, and success stories of entrepreneurs were found to be significant among the facilitating factors. Rao expanded the list of facilitating factors to include (i) technical and professional skills acquired; (ii) allotment of plot/shed in industrial estate; (iii) financial assistance from State agencies, banks, family, friends and relatives; (iv) ancillary relation with large firms; and (v) dependable partners.

6. In another similar study of 40 enterprises in Marripalem and Autonagar industrial estates of Andhra Pradesh, Ashok Kumar found that to become self-reliant and to materialise one’s ideas and skills were the most significant ambitions. Dissatisfaction with the earlier job and dependency situation were the main factors that compelled the respondents to become entrepreneurs. among the facilitating factors, education, training and previous job experience were the most important.

The entrepreneur might have come on his own or on being encouraged by others. Therefore, an attempt was made to ascertain the man responsible for infusing the spirit of enterprise. Nearly one half of the entrepreneurs were self-motivated whereas around one- third of them were motivated by friends and relations and the remaining by their parents.

V.L. Rao has summarised the views of various experts on sources of entrepreneurial supply and motivation in the form of a table which is given below: 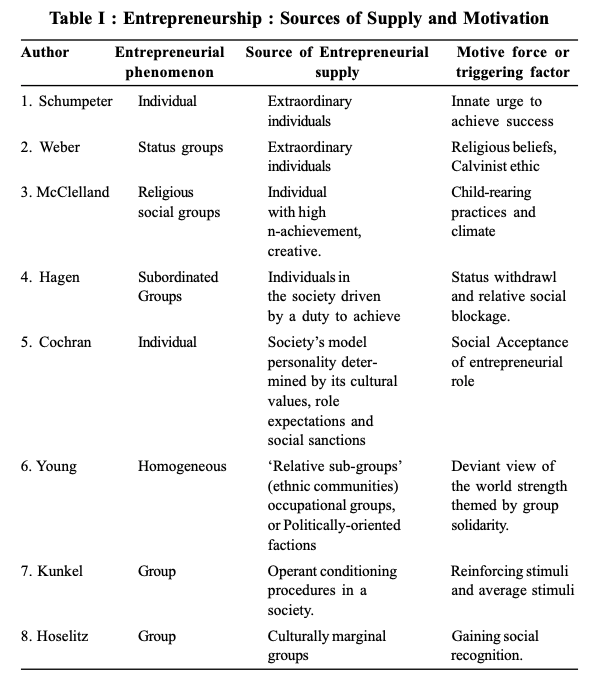 8. K. Sadhak found that monetary consideration was the most important motivating factor. Entrepreneurs motivated by income were mainly traders an salaried employees. Independent job was as the main inspiration for salaried employees who were not satisfied with the’ work environment, nature of job, management style, etc. Self advancement, social recognition, responsibility were other motivating factors.

It is not only the desire to achieve but the favourable environment which translate the desire into reality. The above motivational factors were significantly influenced by certain assisting factors like family environment (business family), technical knowledge (through education or past employment); training and Government incentives. Entrepreneurs from business families enjoyed financial support, former employees had social contact, and engineers were having technical competence. It was, therefore, difficult to single out any particular motivating factor. However, income, social recognition and other ‘pull’ factors strongly induced people to start industry. Moreover, most of the entrepreneurs were, self-motivated. There were some stray cases also induced by varied factors like advice of business friends, the fabulous profits, earned by others in similar concerns, contact it others, etc.

An entrepreneur is an agent who has, to perform several functions to mobilise and utilise resources and to create market. He ventures into an uncertain future to exploit the potentiality that exists. Therefore, entrepreneurship is a very risky proposition. Some people leave very cosy jobs to start their own enterprises. Some merchants who are earning, well put their hard-earned money at stake in manufacturing. Technologists and engineers start their own industry instead of going for safe jobs. All these persons have high achievement motivation. ‘Like all achievement-oriented people, they want to take personal responsibility, tend to persist in the face of a adversity, tend to take moderate risks and like to know the results of their efforts. They are innovative and fall of interpersonal competence. According to McClelland, they are unusually creative, having high propensity of risk-taking capacity and a strong need for a achievement.

Now, it is crystal cleat from the foregoing analysis that the majority of entrepreneurs are motivated to enter industry mainly because of four- factors;

First, they possessed technical knowledge or manufacturing experience in the same or related line.

Second, there was heavy demand for the particular product.

Fourth, they have enterprising attitude, what McClelland designates’ an achievement motive’, to do something independent in life.