The great majority of us grow up with siblings, and the sibling relationship is the longest-lasting we are likely to experience. How important are siblings as an influence on the way we develop? Clinicians and family therapists have long argued that siblings play an important and influential part in children’s development, but until the last two decades, systematic research on sibling influence was relatively sparse. What has recent research told us about the factors that affect the ways in which siblings relate to one another? Is there continuity over time in the friendliness or hostility between siblings? What is the evidence for sibling influence on adjustment and well-being, on social and emotional understanding, and on children’s other relationships?

From infancy to adolescence, relationships between siblings are emotionally powerful. Observational studies report that for some siblings, the majority of interactions between siblings are intensely negative, for others positive emotions are frequently expressed, for others the emotional quality is ambivalent. Continuities in the emotional quality of the relationship are evident from preschool years through middle childhood.

Why do siblings differ in their relationships with one another? Research in the 1970s and 1980s focused chiefly on birth order, gender and age gap as sources of individual differences. For young children the evidence on the importance of age gap and gender for sibling relations is inconsistent; in middle childhood gender differences become more apparent, with boys reporting less warmth and intimacy with their siblings. Links between children’s temperamental characteristics and their relationships with their siblings have been reported, but findings are inconsistent across studies. Recent research on siblings has now broadened to include the quality of close relationships within and outside the family as sources of individual differences, and the evidence for sibling influence on children’s sociocognitive development.

In contrast to this evidence for hostility across family relationships, some studies report that supportive sibling relations can develop in families in which parent–child relations are distant or uninterested. These ‘compensatory’ patterns of family relationships may be more common in families facing stress and social adversity. Siblings can also be sources of support for children growing up in homes with marital conflict, and longitudinal research shows that children have fewer adjustment problems following negative life events if they have a good warm relationship with a sibling (Figure 2.1). 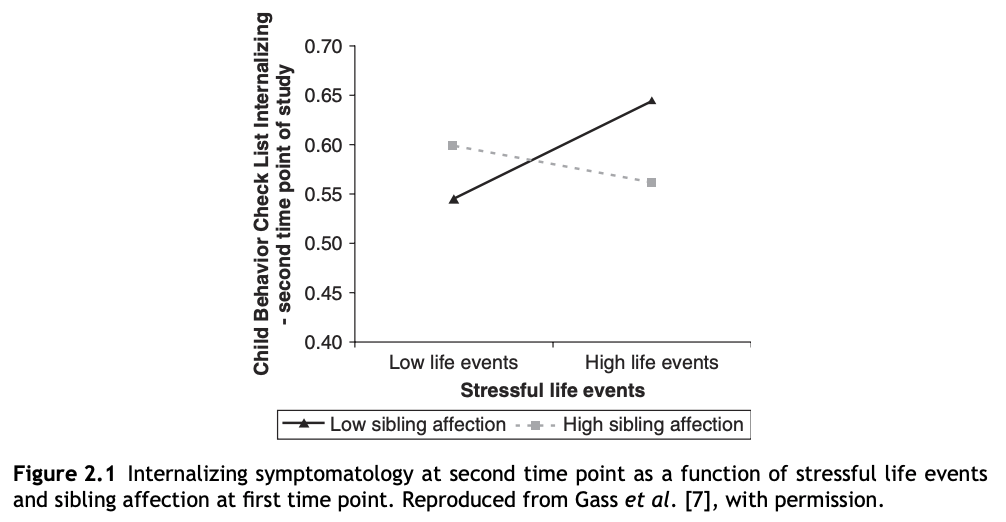 A further point about the complex patterns of links between relationships within the family concerns the consistent evidence that in families in which there are differential relations between parents and their various children – where more affection and attention, or more negativity or harsh discipline is shown towards one sibling than to another – there is more hostility and conflict between the siblings. These links are particularly clear in families that are under stress. Causal inferences cannot be made, however, if the studies are cross-sectional. Recent evidence has shown that children’s interpretation of differential parental behaviour is important. When children interpret their parents’ differential behaviour as evidence that they are less worthy of parental love than their siblings, the sibling relationship is particularly likely to be compromised. These findings remind us how important it is to recognize the context of multiple family relationships within which siblings grow up. From the second year on, children monitor the interactions between their parents and siblings with vigilance.

The evidence that influential experiences within the family differ markedly between siblings has shown us that it is sibling-specific experiences that need to be studied. Innovative analytic techniques have been developed to assess and distinguish between these ‘child-specific’ and ‘familywide’ influences.

SIBLINGS AND THE DEVELOPMENT OF SOCIAL UNDERSTANDING

A striking feature of sibling relationships is their intimacy. Siblings know each other very well. When young they spend more time interacting with their siblings than with their parents or friends, and from very early in childhood know how to upset, tease and irritate their siblings as well as how to comfort and amuse each other. Sibling research has given us an important new perspective on a key aspect of cognitive development – children’s discovery of the mind. The growth of children’s understanding of emotions, thoughts and beliefs, and the links between these inner states and people’s behaviour is a core feature of early cognitive development, and one in which sibling relations can play an important part. Children with siblings begin to show powers of anticipating others’ intentions, sharing an imaginative world, and they engage in talk about why people behave the way they do. Individual differences in experiences of conversations with a sibling about feelings and inner states, and cooperation in shared pretend play, are linked to differences in children’s developing maturity in social understanding. While the issue of direction of influence remains a difficult one, the study of siblings has highlighted the key social processes within the family (e.g. sharing cooperative pretend play, and managing conflict) for these core developments in social understanding. The key distinction is not between only children and those with siblings, but rather the individual differences in the quality of the relationship between the siblings. It is a warm, affectionate sibling relationship that is linked to the growth of social understanding.

Evidence for links between children’s relationships with their siblings and their aggressive oppositional behaviour, and also their internalizing (worrying, anxious and depressive behaviour) has accumulated. The influence is both from older to younger siblings and vice versa. Low levels of prosocial behaviour (caring, empathetic and helpful, supportive behaviour) are associated with hostility between siblings and the development of conduct problems. These patterns are independent of the contribution of poor parent–child relationships, and are evidence for direct effects of sibling conflict and negativity on children. Indirect effects of siblings on adjustment have also been found, for instance in the impact of differential parent–child relations on children’s adjustment problems.

Research that includes children’s perceptions of their relationships with siblings, friends and mothers, and links with their adjustment paints a complex picture. This can be illustrated by Stocker’s study of the self-reports of 7–8-year-olds on their relationships. First, warmth in relations with each partner was associated with fewer feelings of loneliness in peer contexts and better behavioural conduct. Warmth in sibling relationships and in friendships was associated with a sense of self-worth, and in friendship was linked to less depressive mood. There was evidence for some correlations across the different relationships, but these correlations were not high. Compensatory processes were found, for instance, in children’s sibling relationships and friendships in relation to behavioural adjustment. High levels of warmth in friendships compensated for low levels of warmth in sibling relations (and vice versa) in relation to adjustment outcomes. Finally, children who perceived low levels of warmth in their relationships with both mother and sib had significantly worse outcomes on loneliness, self-worth and behavioural conduct.

Bullying victimization by siblings at home has been reported, and linked to bullying at school and to adjustment problems. In a study of 12–15-year-olds in Israel, 16.2% were bullied at home by siblings, and more than half of these were also involved in bullying incidents at school. Ethnic (Jewish vs Arab) and sex differences were small compared to the effects of the sibling relationship on behaviour problems. The findings indicate that intervention programmes targeted at children’s close friendships and sibling relationships may be important in improving children’s well-being.

The frequent conflicts between siblings, the evidence for sibling bullying and for links between sibling disputes and children’s aggressive behaviour has led to an emphasis on reducing sibling conflict as the key mechanism for improving the relationship, for example by training parents. The short-term effects of parental mediation (encouraging reasoning, discussion of emotions, and taking the perspective of the other child) were studied with 5–8-year-olds in Canada. Children responded appropriately to the mediation, and the programme empowered children to solve conflict issues. These programmes do lead to reduced conflict, but fail to increase the positive aspects of the relationship. In contrast, Kramer has set out a useful review of the positive aspects of the relationship, and devised a programme for intervention with siblings and parents, ‘Fun with Sisters and Brothers’, based on the competencies highlighted in the review. These competencies include:

The contribution of the programme to siblings’ relationships is awaited with great interest.

It should be noted that most studies of siblings have been conducted with middle-class, urban, two-child, Caucasian families in North America or Britain; little is known about minority ethnic or linguistic groups. There are clear and important opportunities for research, using longitudinal studies, to fill some of the gaps in what we know about this interesting, intense and life-long relationship between siblings.