Social and emotional development (SED) involves the acquisition of skills for expressing emotions, regulating emotions, and managing social relationships within the family, school and peer group. Some of the milestones associated with these aspects of development are given in Table 10.1. 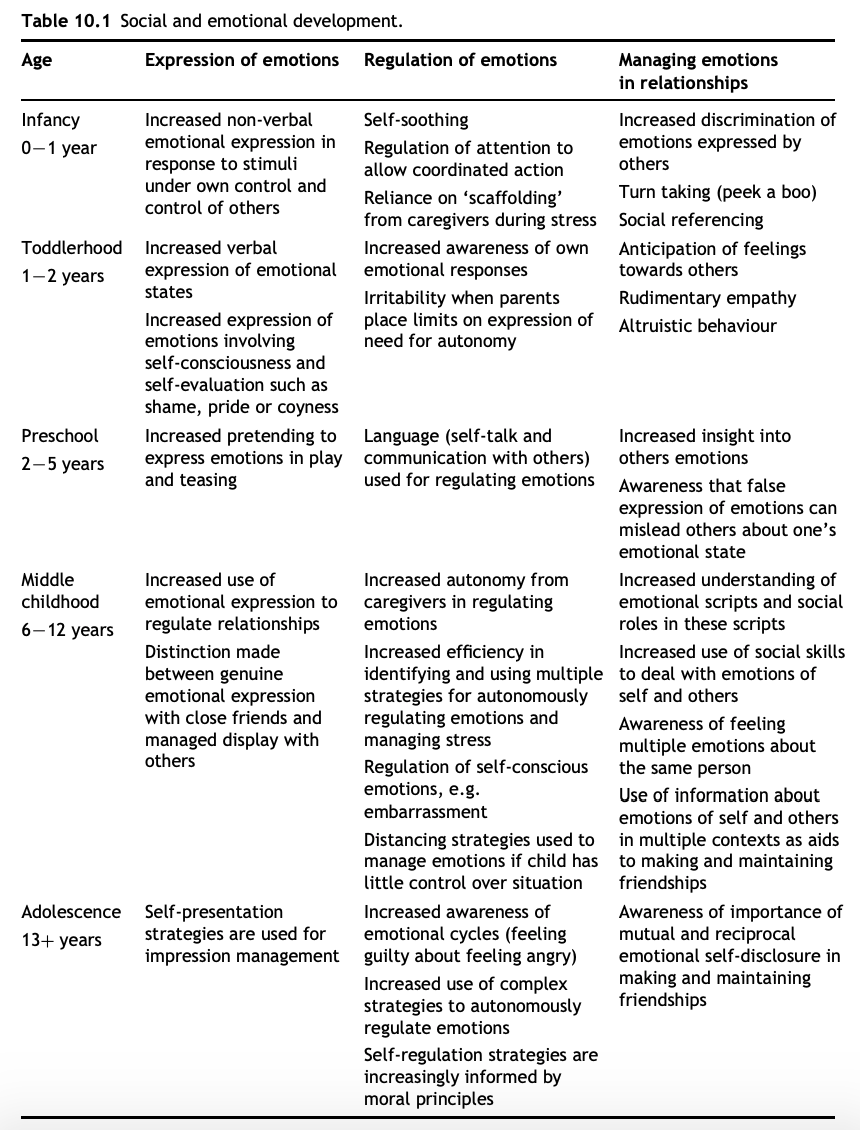 Middle childhood, the period between 6 and 12 years, occupies a pivotal position between the preschool years and adolescence with respect to SED. During the preschool years rudimentary skills are acquired, while in adolescence, sophisticated skills are refined. However, it is during middle childhood that particularly important developments occur within the emotional and social domains.

During the first year of life there is a gradual increase in non-verbal emotional expression in response to all classes of stimuli including those under the infant’s control and those under the control of others. At birth infants can express interest as indicated by sustained attention, and disgust in response to foul tastes and odours. Smiling, reflecting a sense of pleasure, in response to the human voice appears at 4 weeks. Sadness and anger in response to removing a teething toy are first evident at 4 months. Facial expressions reflecting fear following separation become apparent at 9 months. Infants also show an increasingly sophisticated capacity to discriminate positive and negative emotions expressed by others over the course of their first year of life. During the first year of life infants develop rudimentary self-soothing skills for regulating their emotions such as rocking and feeding. They also develop skills for regulating their attention to allow themselves and their care-takers to coordinate their actions to soothe them in distressing situations. They rely on their care-takers to provide emotional support to help them manage stress. The capacity for turn taking in games such as peek-a-boo develops once children have the appropriate cognitive skills for understanding object constancy. Social referencing also occurs towards the end of the first year when children learn the appropriate emotions to express in particular situations by attending to the emotional expressions of their care-takers.

During their second year infants show increased verbal expression of emotional states, and increased expression of emotions involving selfconsciousness and self-evaluation such as shame, pride or coyness. This occurs because their cognitive skills allow them to begin to think about themselves from the perspective of others. During the second year of life toddlers show increased awareness of their own emotional responses. They show irritability – often referred to as the ‘terrible twos’ – when parents place limits on the expression of their needs for autonomy and exploration. In relationships they can increasingly anticipate feelings they will have towards others in particular situations. They also show rudimentary empathy and altruistic behaviour.

Between the ages of 2 and 5 years children increasingly pretend to express emotions in play and when teasing or being teased by other children. They use language in the form of both internal speech and conversations with others to modulate their affective experience. There is increased insight into the emotions being experienced by others and an increased awareness that we can mislead others about what we are feeling by falsely expressing emotions. More sophisticated empathic and altruistic behaviour also begins to develop within the family and peer group during the preschool years.

During middle childhood (6–12 years), with the transition to primary school and increased participation in peer group activities, children’s SED undergoes a profound change. Rather than regularly looking to parents or caregivers to help them manage their feelings and relationships, school-aged children prefer to autonomously regulate their emotional states and depend more on their own resources in dealing with their peers. As they develop through the middle childhood years they show increased efficiency in identifying and using multiple strategies for autonomously regulating their emotions and managing stress. During this process they learn to regulate self conscious emotions such as embarrassment and to use distancing and distraction strategies to manage intense feelings when they have little control over emotionally challenging situations. There is increased use of emotional expression to regulate closeness and distance within peer relationships. Within this context, children make clear distinctions between genuine emotional expression with close friends and managed emotional displays with others.

During middle childhood children develop an understanding of consensually agreed emotional scripts and their roles in such scripts. There is also an increased use of social skills to deal with their own emotions and those of others. Children become aware that they can feel multiple conflicting emotions about the same person; for example, that they can be angry with someone they like. They use information and memories about their own emotions and those of others in multiple contexts as aids to making and maintaining friendships. As adolescence approaches they develop an increasingly sophisticated understanding of the place of emotional scripts and social roles in making and maintaining friendships.

Cooperative play premised on an empathic understanding of other children’s viewpoints becomes fully established in middle childhood. Competitive rivalry (often involving physical or verbal aggression or joking) is an important part of peer interactions, particularly among boys. This allows youngsters to establish their position of dominance within the peer group hierarchy. Peer friendships in middle childhood are important because they constitute a source of social support and a context within which to learn about the management of networks of relationships. Children who are unable to make and maintain friendships, particularly during middle childhood, are at risk for the development of psychological difficulties.

During adolescence from 13 to 20 years there is an increased awareness of complex emotional cycles, for example feeling guilty about feeling angry or feeling ashamed for feeling frightened. In adolescence, youngsters increasingly use complex strategies, such as reframing, to autonomously regulate emotions. These self-regulation strategies are increasingly informed by moral principles. However, alongside this concern with morality, self-presentation strategies are increasingly used for impression management. Adolescents gradually become aware of the importance of mutual and reciprocal emotional self-disclosure in making and maintaining friendships.

With regard to personal factors, young people are more likely to develop the skills for emotional expression and regulation and for making and maintaining relationships if they have favourable genetic endowments, easy temperaments, adequate cognitive abilities to understand their feelings and the emotional demands of their important relationships, adequate self-esteem, the capacity to understand social situations accurately and a well-developed conscience. With regard to contextual factors, positive SED is more likely where children have developed secure attachments; where their parents have adopted an authoritative parenting style characterized by warmth and a moderate level of control; where their parents have no major adjustment problems; and where the family, school, peer group and wider social environments have been supportive. For example, in a UK study Bowes et al. found that children from supportive families showed resilience when bullied in primary school.

Problematic SED may occur where there are difficulties with genetic endowment, temperament, cognitive abilities, self-esteem, social cognition and moral development. Problematic SED is associated with unfavourable genetic endowments indexed by family histories of psychopathology. A childhood history of difficult temperament is also associated with problematic emotional development. With regard to cognitive abilities, children with intellectual disabilities tend to acquire skills for expressing and regulating emotions and managing relationships at a slower rate than children without such disabilities. Disproportionately more children with intellectual disabilities, than without, show challenging behaviour associated with emotional regulation problems. Children with low self-esteem, who evaluate themselves negatively, have difficulty regulating negative mood states and managing relationships. Children who have problematic social cognition, notably those who have developed a hostile attributional bias where they inaccurately attribute negative intentions to others, have difficulties regulating anger and maintaining positive peer group relationships. Children who have not internalized social rules and norms and developed a conscience, particularly those with callous unemotional traits, have difficulties empathizing with others and making and maintaining social relationships. The foregoing are some of the ways in which personal vulnerabilities can compromise SED in middle childhood.

Social and emotional development during this period may also be compromised by environmental adversity characterized by difficulties with attachment, parenting style, parental adjustment, family functioning, the school environment, peer group relationships, and the wider social and cultural environment. Problematic SED is more common where children have developed insecure attachments to their parents or caregivers. Non-optimal family environments can also impair SED. Such family environments may be characterized by parenting problems, child abuse or neglect; parental mental health problems or criminality; and family conflict or domestic violence.Where there is a poor match between children’s educational needs and educational placement, this can have an adverse effect on their SED. For example, problems with SED may be exacerbated where a child with a specific learning disability, intellectual disability or psychological disorder is placed in a mainstream class without adequate special educational resources. Schools with inadequate policies and procedures for managing bullying and victimization of pupils by peers or teachers can also have a negative effect on SED. Problematic SED may be exacerbated where children are rejected by their peers or where they spend a significant amount of time with antisocial peers. Within the wider social and cultural environment a range of factors can have a detrimental impact on SED. These include a high level of extrafamilial stress and a low level of extrafamilial perceived social support, and also exposure to media (TV, films, computer games) that model and reinforce the inappropriate expression of aggression, anxiety, depression, elation and other emotions.

Prevention and treatment programmes have been developed to address SED problems. Successful prevention programmes begin during the preschool years. They involve screening at-risk children on the basis of their status of personal and contextual risk factors, and offering complex interventions such as family support, parent training and child stimulation that target multiple risk factors. With regard to treating children with SED problems, it is best to base interventions in any particular case on a formulation of factors relevant to that specific case and the current evidence base for effective interventions for such difficulties, because problems with SED are typically caused and maintained by the complex interaction of multiple personal and contextual factors.