The Framework of Emerging Economies

The Framework of Emerging Economies

These forthcoming chapters aim at developing ideas for emerging economies to think about international business. Seen from already worked out chapters, it is clear that the domestic economy is not sufficient in driving the economy alone. There is a constant need to think of the external economy. There might be various ways of learning about the external economy but the influential work of Pankaj Ghemawat of Harvard University based on the CAGE model can be a suitable means to firstly understand the complexities of international trade and secondly appreciate the position of emerging economies in international business.

Four key variables are developed in the CAGE model where the acronym stands for cultural, administrative, geographic and economic distances. All such distances are impediments to international business on behalf of emerging markets. The model is interpreted in two ways. First, country pairs where trade takes place between two countries and second, the emerging economy trading both unilaterally and multilaterally, i.e. with several countries. Each component illustrates the differences that exist. For business managers, it is important to understand the CAGE concept and see how differences might be overcome. It also becomes a roadmap for emerging economies to think about in the development of effective international business.

The CAGE model is depicted in the chart below and explains variations between bilateral and unilateral or multilateral trade . 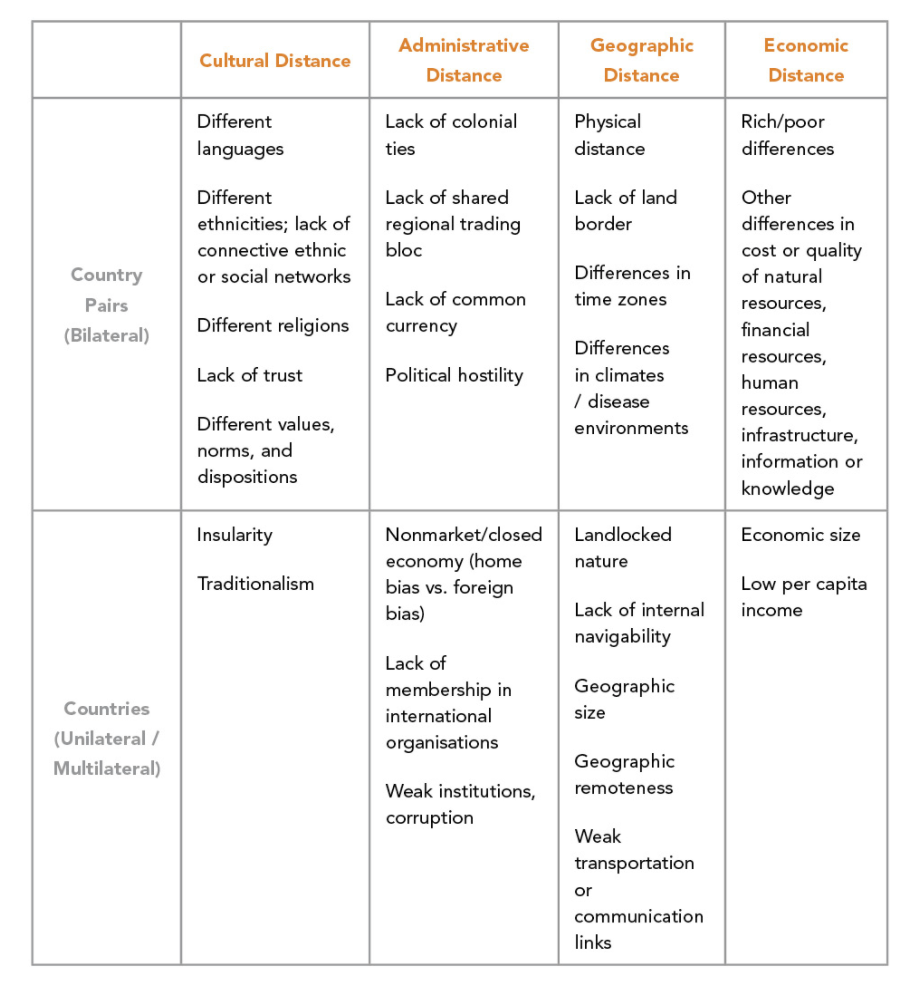 The term cultural distance includes differences in factors such as religious beliefs, social norms, language, and race. Ghemawat states the example of countries that have a common language and that the trade between these countries will be three times greater than between countries that do not share a language. Hence, there is a distance inherent in speaking different languages that we argue is also relevant when considering which country to enter, e.g. there are costs entailed in miscommunication, lack of understanding and also more obvious ones such as the cost of hiring a translator. Miscommunication and a lack of understanding between headquarters and a subsidiary in an emerging market can create problems in form of aligning the subsidiary’s goals with headquarters’. However, there are other cultural attributes where it is not as simple to understand how they create distance, e.g. differences in religions, ethnicities, and social norms. These distances are often created when consumers choose between substitute products and their cultural programming makes them prefer certain features before others.

Another distance that is likely to affect an evaluation of potential markets is administrative distance. This term includes factors such as having a common currency, being part of the same political union or having preferential trading agreements. All of these factors can separately increase trade by more than 300 percent each and since these factors obviously facilitate trade, we argue that they would also influence the choice of country to enter. Although, it should be noted that political ties must be of a friendly nature to facilitate trade. If they are not, it will result in an even bigger distance between the respective countries. A larger distance can also be created if a country imposes trade barriers such as quotas or tariffs. Another factor that is likely to have a strong effect on the evaluation of markets is institutional infrastructure. Factors such as corruption or social conflict usually dampen economic activity heavily into a country.

Geographic distance is not only the actual distance in kilometres to the host country, but also a matter of e.g. access to waterways, physical size of the country, and communication and transportation infrastructure. The infrastructure of a country can alter its ranking in an evaluation since it affects the cost and speed of transportation of products. Even information infrastructure (e.g. multinational banks and communications) can influence the distance between two countries.

Economic distance implies that companies relying on economies of scale, experience, and standardisation should aim their efforts on markets with a similar economic profile. The reason for this is that, in order for the company to exploit their competitive advantage, they need to imitate their existing business model and this can be hard to achieve if the cost and quality of resources, and consumer incomes are very different. On the contrary, there are companies who base their advantage on these differentials (arbitrage) i.e. exploit cost and price differentials between markets.

Analysis of the CAGE model

After having reviewed the key components of the CAGE model, a two-way analysis with illustrations ins provided in this section. 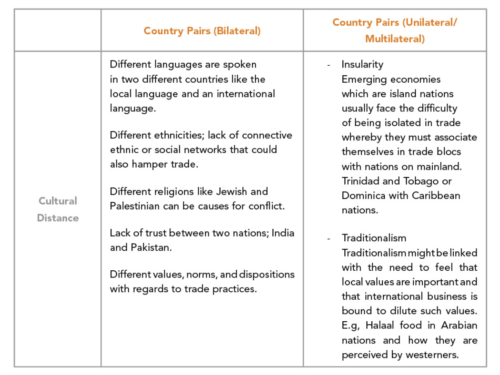 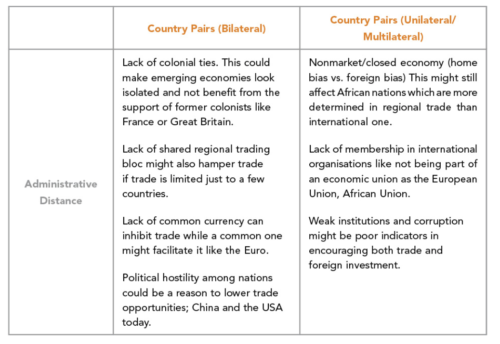 Case Study: What is different about emerging economies?

Starting with economic differences, the most obvious are the emerging economies’ lower per capita incomes and faster real growth rates. But even those characterisations fail to apply to every emerging economy: The International Monetary Fund lists both Qatar and Yemen as emerging or developing even though they had the world’s third-highest Gross Domestic Product (GDP) per capita and lowest real growth rate, respectively, in 2015. From a business perspective, lower research and development (R&D) intensity in emerging economies is particularly salient, given the association between R&D (and advertising) intensity with resources that enable firms to become multinational. Also, the higher proportion of GDP coming from the industrial sector in emerging economies implies that it is no longer appropriate to treat ‘industrialised countries’ and ‘advanced economies’ as synonymous .

Culturally, there are statistically significant differences on three of Hofstede’s dimensions of national culture. Greater power distance, collectivism, and long-term orientation in emerging economies all imply requirements for executives to vary leadership practices. Based on data from the World Values Survey, people in emerging economies accord work a higher priority in their lives—presumably an advantage for employers—but have lower levels of trust in foreigners, which can complicate international business activities in particular. Furthermore, the higher cultural fractionalisation and lower representation of women on boards in emerging economies highlight the importance of thinking about diversity within as well as across countries.

Administratively, emerging economies rank significantly worse than advanced economies on indicators of institutional quality, e.g., rule of law, political stability, and control of corruption, all of which can dampen international business activity. According to an estimate by Shang-Jin Wei, ‘an increase in the corruption level from that of Singapore to that of Mexico would have the same negative effect on inward FDI as raising the tax rate by fifty percentage points. ‘Emerging economies also require more documents to conduct international trade and rank lower on the World Economic Forum’s Enabling Trade.